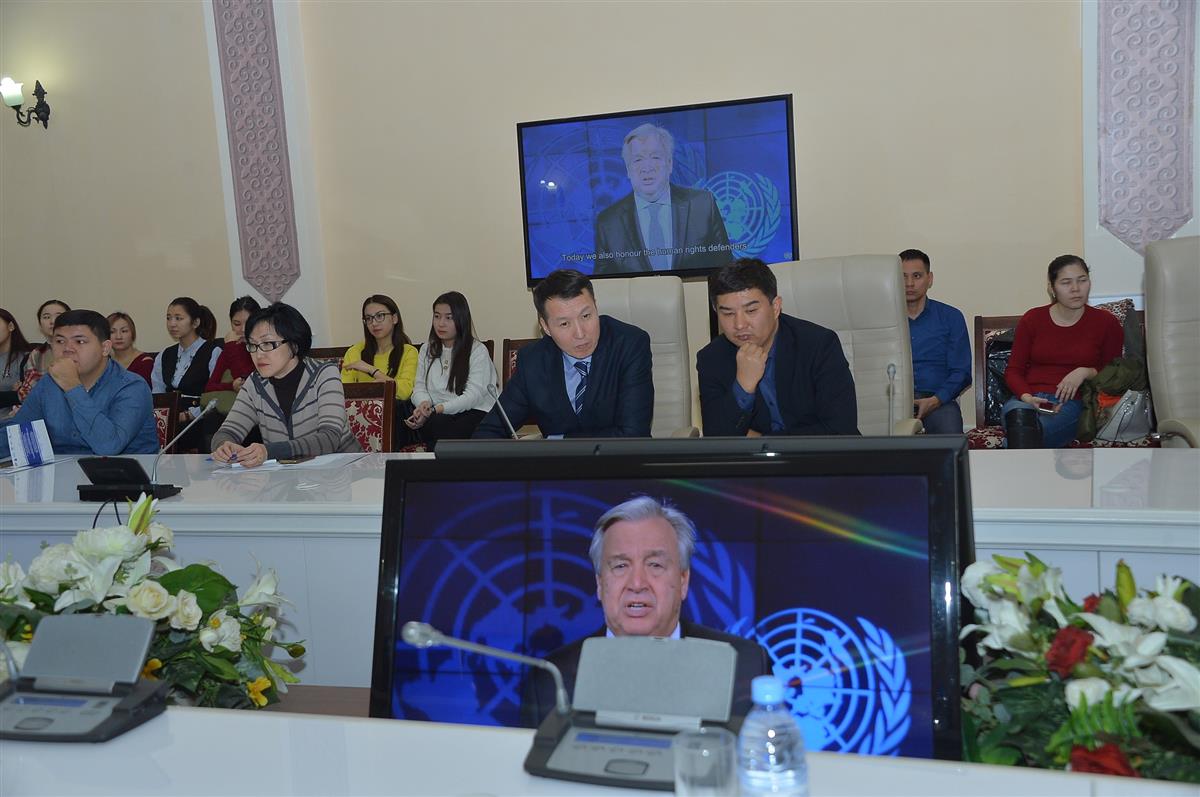 On December the Library of Al-Farabi Kazakh National University held a round table dedicated to the 70 th anniversary of the adoption of the “UN Universal Declaration of Human Rights”. The anniversary event was organized by: UNESCO Chair, International Journalism and Media in Society; UNESCO Chair in Sustainable Development; Institute for Sustainable Development. Ban Ki-moon at KazNU, Al-Farabi.

The agenda of the round table was topical, which found expression in the interested and inspired speeches of the participants, they also appeared when discussing the problems of the UN activities on the implementation of the principles of the “UN Universal Declaration of Human Rights”. The work of the round table was simultaneously broadcast on the international communication platform G-Global and was available to listeners online. The discussion was attended by heads and representatives of  Kazakh Ministry of Foreign Affairs, the UN, UNESCO, UNDP, UNAI in Almaty, young scientists, undergraduates and doctoral students of universities in Kazakhstan.

The solemn part of the round table was opened by the Vice-Rector, Director of the Institute of Sustainable Development. Ban Ki-moon, Professor Rafis Abazov. On behalf of the organizers, he congratulated all the participants on this significant date, which is celebrated today by the whole civilized world. In his report, he focused on the analysis of the activities of youth structures in Kazakhstan, such as the UN Model - New Silk Road in strengthening peace and human rights in Central and South Asia. In the report of prof. R. Abazov there were valuable thoughts about the importance of the role of the state in setting standards of culture, policy, society, as well as the universality of the values ​​of humanity, which carry the principles of the “UN Universal Human Rights Declaration”. The scientist stressed the position of adherence and commitment of the countries of Central Asia, the UN countries, and in particular the state of Kazakhstan, to the standards of universal respect for the rights and freedom of other states and regions. Before his speech, the Head of the Representative Office of the Ministry of Foreign Affairs of Almaty, Ruslan Bultrikov, congratulated all participants on the date of the adoption of the Declaration. He recalled the events of 1948, when this important world document, the UN Universal Declaration of Human Rights, was adopted at the UN meeting. “The ideas of human rights from the “ Declaration of Human Rights ”have had revolutionary consequences over the past 70 years,” he said. The events and facts that followed its adoption inspired and promoted the adoption of more than 60 different international documents in the field of human rights. At the same time, for 70 years the Declaration has not lost its relevance and to this day this document is a universal human rights guide for the global community. It is not accidental that the Declaration has been translated into more than 500 languages ​​and dialects of the world. Thus, it has become one of the most widely known documents in the world. Today, Kazakhstan is a party to all key international human rights instruments, which testifies our firm commitment to consistently strengthening the national human rights system. One of the backbone elements of this system is the establishment of the ombudsman and the Commission on Human Rights under the President of our country, which are the links between the institutions of civil society and the state. The speaker noted the perspectives of the goals and objectives of the young generation.