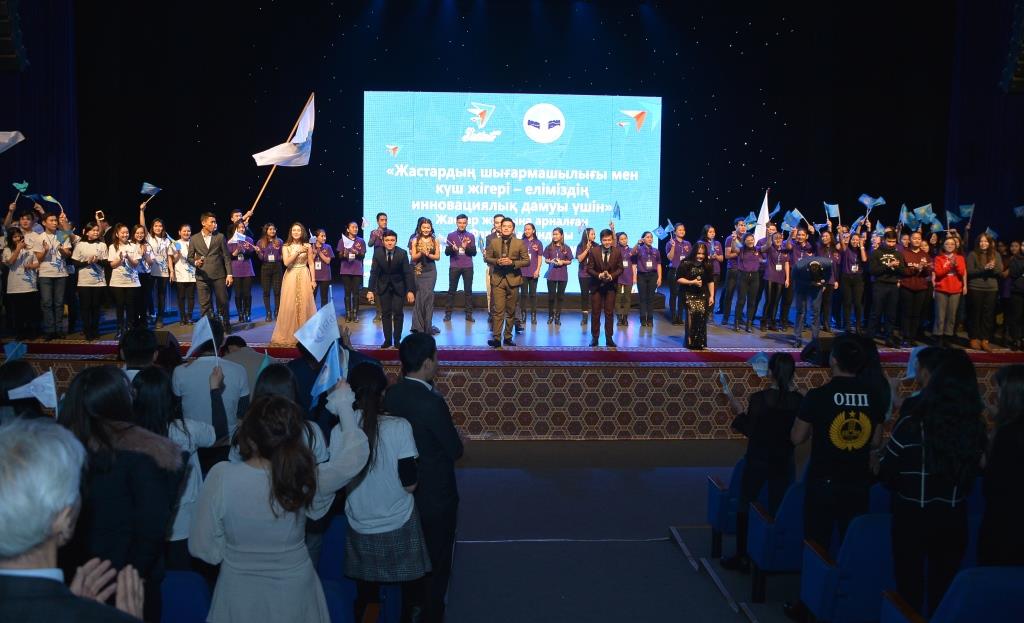 The speech by the Head of the State at the opening ceremony of the Year of Youth «Tauelsіzdіktіn Urpaktary» (The Generation of Independence) was discussed at the Student Forum held in Al-Farabi KazNU. The students of the leading University called on the younger generation of Kazakhstan to join the National Youth Movement «Creativity and the Energy of Youth Towards the Country’s Innovative Development! », which they have initiated.

200 thousand young people have gathered on one platform, including the leaders of student organizations, scientists and startupers, entrepreneurs and volunteers. The exchange of opinions and experience was carried out in all the main areas voiced by the President. The main vector of discussion was the search for ways to involve young people in the creation of a knowledge economy.

Opening the Forum, Rector of Al-Farabi KazNU, Academician Galym Mutanov highlighted: «Over the years of independence, the young generation of a new formation has been brought up in Kazakhstan. The President of the country and the state have invested a lot in its formation and development. Today, young people have high hopes and responsibility for strengthening the independence of the state, and for the formation of an intellectual nation and increasing its competitiveness in the world».

Students have shared their vision of how they can contribute to the fulfillment of the tasks set by the Head of the State for the younger generation. They also have presented their ideas and innovative projects aimed at creating Industry 4.0, and shared their experience in implementing startups.

The outcome of the Forum was the launch of an initiative to create a National Youth Movement «Creativity and the Energy of Youth Towards the Country’s Innovative Development! ». Students made an appeal to the youth of the country with a call to take the most active part in this movement and to direct their knowledge, skills and creativity to the development and implementation of creative ideas, projects and innovations.

«Holding of the Year of Youth is a manifestation of a special concern of the Head of the State for the younger generation, who is the future of the country. We should not wait for the state to do something for us. Everyone should ask themselves: «What can I do for the country? »», - the Message says.

It also noted that annually almost 200 thousand students graduate from the Universities in Kazakhstan. But with what baggage of knowledge do they come into life and how active is their citizenship? It is important that they after obtaining necessary competencies can create job places themselves. After all, the prosperity of the country depends on contribution they make to the development of Kazakhstani society. As the President said, Kazakhstan needs a creative generation that will raise science and innovations and create Industry 4.0. It is only in this way the development of the country in accordance with global technological trends and its competitiveness on the world stage can be ensured.

The document emphasized that, as practice shows, the involvement of young people in the development of the knowledge economy contributes to the creation of platforms aimed at identifying and supporting new ideas, thoughts and innovations. In order to stimulate the intellectual and creative potential of talented young people Al-Farabi KazNU has been implementing for six years a project to organize competitions for the title of the Best Young Scientist, for the Best Student Innovation Project and Startup – «My Real Contribution to the Innovative Development of Kazakhstan», for the Best Essays and Poetic Work – «What Can I Do for the Prosperity of My Country» and the Best Patriotic Song: «Mangilik El - Muratim». The results of the competitions will be summed up at the Festival devoted to the Day of the First President of the Republic of Kazakhstan.

«Based on this experience, in order to form the National Youth Movement under the motto: «Creativity and the Energy of Youth Towards the Country’s Innovative Development! » we propose to spread the practice of holding these competitions annually among all young people in the Republic. And we urge all students to join this movement», - said KazNU’s students in their appeal.

The Forum participants expressed their confidence that the implementation of this project on a systematic basis throughout Kazakhstan will ensure a constant influx of new ideas, projects and creative initiatives of young people, and it will contribute to the formation of entrepreneurial skills and motivate them to create their own innovative enterprises in the future.

«If every University, enterprise and region joins this project, the innovative youth movement will become truly massive and will have a powerful stimulating effect in the development of the knowledge economy. We hope that the best initiatives of the youth will be supported by government agencies at all levels. We are very enthusiastic about the instructions by the President to create a Fund to support youth start-ups and we appeal to business structures to establish grants to help talented young people to implement their ideas. All this will contribute to creating a favorable innovation environment in society and turning the creativity and energy of young people into a powerful creative force! The breakthrough of Kazakhstan among the 30 most developed countries of the world entirely depends on us. The future of the country is in our hands! », - called the KazNU’s students.

The Forum participants expressed their hope that the appeal and the National Youth Movement initiated by them will receive the general support of Kazakhstani students.